After enduring hot and humid weather for the last month, the crisp spring air of Japan was just what I needed to boost my energy. This also meant adding a few items to my wardrobe including a light down jacket and some bright green mittens.

We spent one quick day in Tokyo (with the intention of coming back soon) before  jumping on a bullet train to Takayama, a city with a small town feel and scenic landscapes. It is a great place to see some traditional Japanese buildings.

We stayed at Sakura Guest House which was our best accommodation yet! It is clean, cosy and has a fantastic view of the Japanese Alps. Another bonus is there are  bicycles that can be rented for 600 yen for the day, which as we discovered is the perfect way to get around the city. 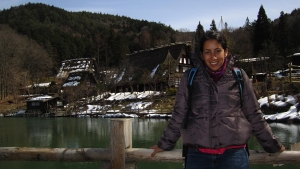 We started our day at the morning market for breakfast and then cycled the city which was filled with traditional shops and sake breweries.

My favourite sight was the picturesque  Hida Folk Village which showcased a number of snow dusted traditional farmhouses. While we were there I even got to taste some shiitake mushroom tea, which I thought tasted like vegetable soup broth.  In Takayama I also had my first ‘made in Japan’ sushi roll which was exceptionally delicious, and tasted Sake which I strongly disliked. 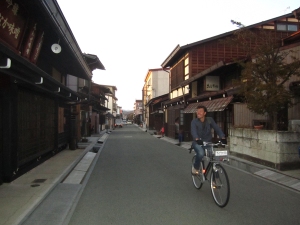 One of the best things about Takayama was that there were very few other tourists around.  I guess the chilly weather scared them away, which made it a very peaceful two days.

What do you think? Cancel reply